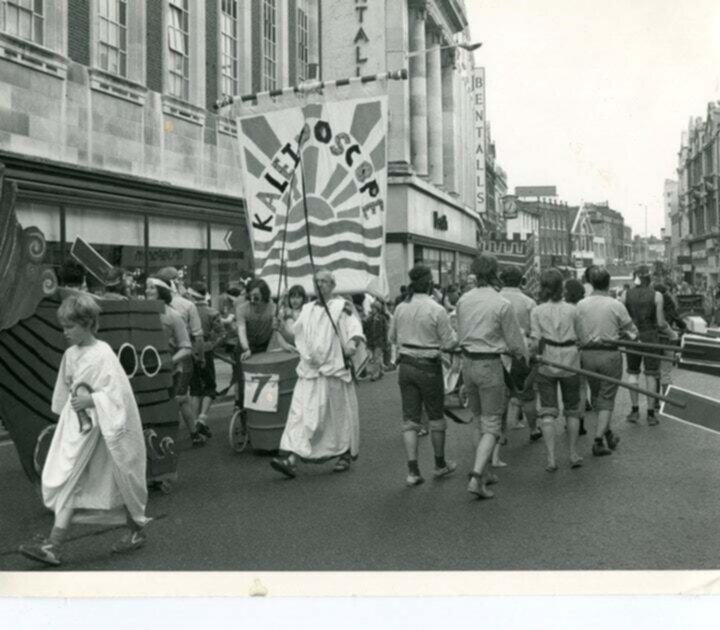 Our story begins in Kingston upon Thames. It’s 1968 and sex and drugs are the height of fashion. Pubs close their doors at 11pm, unrest brews in the streets and large brawls erupt. A safe place is needed for Kingston’s youth to gather.

Kaleidoscope, set up within an urban church, became that place. The name reflected the shattered pieces of youth culture coming together, be they mods, rockers, teddy boys, hippies or Hell’s Angels – everyone was welcome at Kaleidoscope.

A mission to protect the youth

Kaleidoscope’s mission was to protect people. We began organising a clinic for those visiting the club. The clinic was held in the Minister’s office, where both treatment and advice were dispensed without judgement.

The services grew in popularity, whilst also courting controversy, and we began to offer services to the wider community, many of whom were not strictly members of the club. By 1975 a new building had been designed, and in 1977 the red brick church, hostel and club were opened.

Ahead of its time

As a drug service Kaleidoscope was ground-breaking in adopting a harm reduction approach to its work. Methadone was dispensed for people to stabilise their drug use. Always paving the way, Kaleidoscope introduced the first UK needle syringe exchange in 1986, and developed the first methadone dispensing service. Our way of working eliminated waiting lists, and people got the help they deserved quickly.

Kaleidoscope’s influence extended overseas, and during the 90’s we supported emerging drug services in Central and Eastern Europe, as well as in Asia. Our work in India and Nepal was pivotal, with the first needle syringe exchange set up in Calcutta, and a methadone dispensing service in Kathmandu.

The millennium proved another dramatic change for Kaleidoscope. In 2002 we were approached to start a new service in Newport, which became our new home. The service supported people across Gwent, and within just 3 months 100 people were in treatment. In a year, that number swelled to 500.

A new era, with a nod to the past

Since moving to Wales we have become a major substance misuse service provider and run projects across the country, as well as our 20 bed in-patient detox unit in the Wirral.

We are one of the few remaining not for profit Organisations that remain a family organisation with our CEO Martin Blakebrough, the son of Kaleidoscope’s founder Eric Blakebrough.